Continuing the theme of focusing on disk-related cases (yesterday I posted an article detailing how to fix the "Verify BCDBootEx" step failing on HP ProDesk 600 MT G3 systems), this post showcases yet another reason why you should stop deploying systems in Legacy mode. It also shows how a little time spent on reviewing log files to get a couple of clues can quickly lead to a solution.

I love the questions people post on the TechNet forums and I try to help them successfully troubleshoot their problems when I have some spare time on my hands. This particular question was submitted back in September 2017 on the MDT forum because an attempt to deploy a Windows Server 2012 R2 image resulted in an error: FAILURE ( 5615 ): False: Boot Drive was not found, required?

I asked the user to upload his BDD.log of a failed OS deployment. After receiving the log a short time later, I opened it and scrolled down to the last error message: 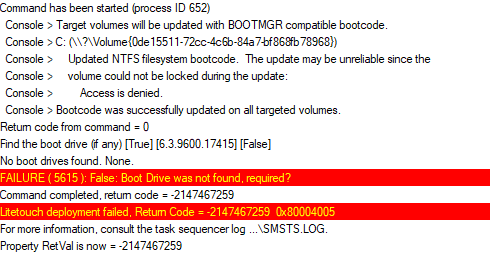 It showed that the LTIApply script could not detect any boot drives followed by the generic error message Litetouch deployment failed, Return Code = -2147467259 0x80004005.

This information indicated that while MDT could successfully apply the OS image, an attempt to write BCD entries failed. My assumption, therefore, that the issue was being caused the Format and Partition step. I examined the log to see how diskpart configuration looked like. This is where the log file was essential: it showed that the OS partition size was almost hitting 4 TB.

I also saw that the system was configured to use legacy MBR style partitioning as indicated by the value of the IsUEFI property:

It’s unfortunately still not widely known that when using MBR style partitioning there is a Windows Storage limit of 2TB. Funny story: I am still seeing customers using legacy BIOS configuration for OS deployment and I wish they would stop rather sooner than later (as a matter of fact, Intel plans to remove legacy support from new client and server platforms by 2020). Like many other technologies designed several decades ago (the first BIOS implementation was invented by Gary Kildall in mid-seventies), it's naivete is staggering when viewed through modern eyes. UEFI offers superior user experience as well as a wide range of security features such as Secure Boot, Signed Capsule and so on. This led me to the recommendation to reconfigure the server in question to use a GPT (Guid Partition Table) configuration (albeit using a smaller partition would have worked in theory). The user verified the suggestion and confirmed that the issue was solved.