As Windows 10 Redstone 4 Update (1803) development winds down, it’s the grandiose time to examine updated and new Group Policy settings. There is (obviously) no official documentation from the Group Policy team at this point and there might be quite a few changes to Group Policy settings before Windows 10 Spring Update hits RTM. Still, it can't hurt to poke around current ADMX files because there are truly several things duller in our line of work than comparing thousands of lines of text. Right?

Based on my results, the following Group Policy settings were added in Windows 10 version 1803 (Insider build 17101), or modified to an extent that warrants listing them here:

Note: An Excel spreadsheet containing policy descriptions, registry paths and possible settings (where applicable) is attached to this post. This time around I am also including a full list of policy settings which had been removed from Windows 10 build 17101 and might wind up not being included in the final build of Windows 10 1803. Please keep in mind, that the text-based analysis is somewhat error-prone, so take the information below with a grain of salt. 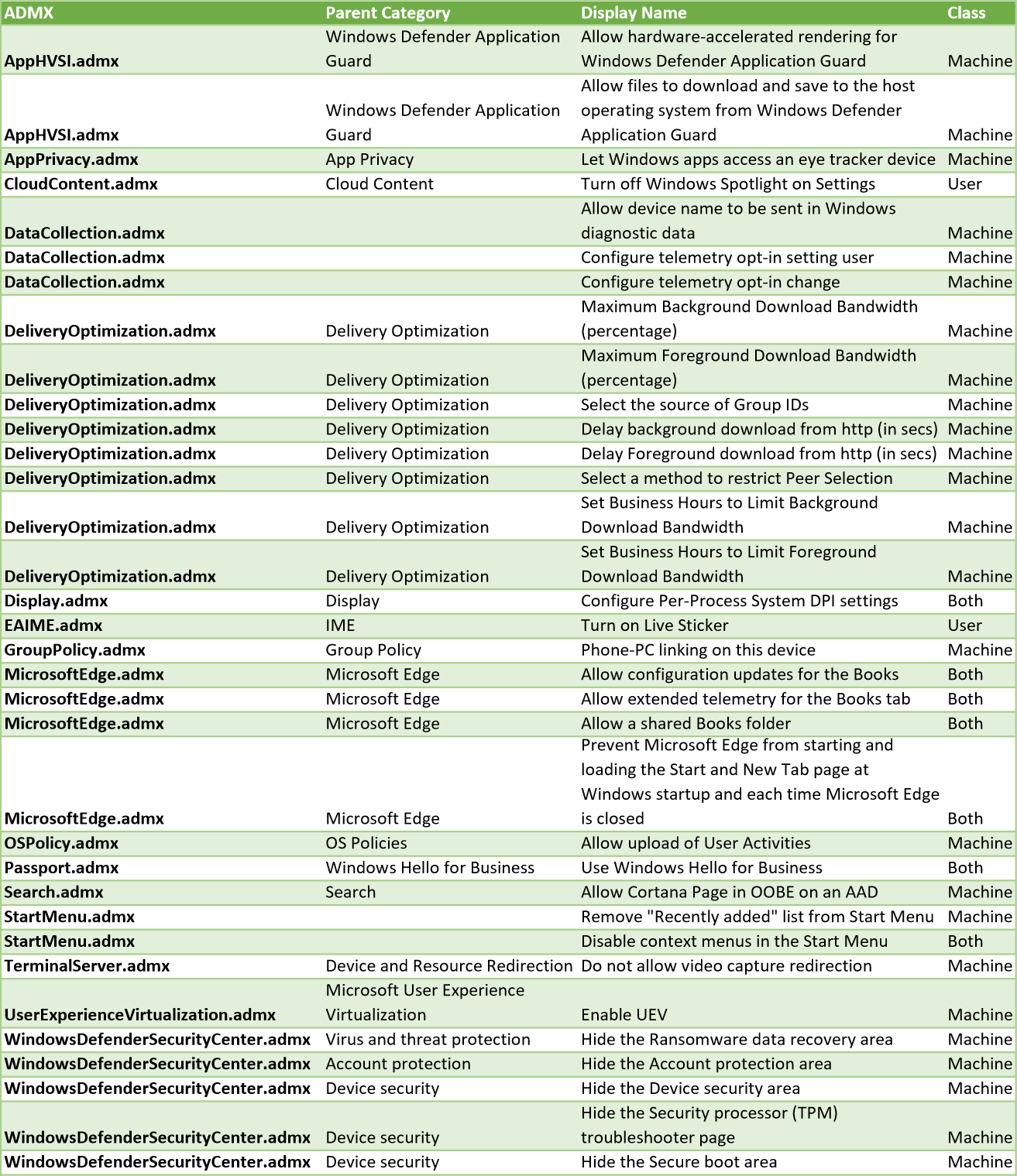 Additionally, Microsoft added a bunch of Delivery Optimization configuration settings and implemented additional telemetry controls including a policy setting which determines whether people can change their own telemetry levels in Settings.

As a side note, Windows Defender Exploit Guard Controlled Folder Access feature introduced in Windows 10 1709 in order to protect valuable data from malicious apps and threats, such as ransomware, is now including two additional modus operandi: Block disk modification only (which blocks only attempts by untrusted apps to write to disk sectors but at the same time allows modification or removal of files in protected folders) and Audit disk modification only (this setting will only record attempts to write to protected disk sectors in the Windows event log).

Mercifully, there are also a few new features and corresponding group policy settings which are so meaningless, that I have to mention them here because they may literally make your brain hurt. There is now an odd policy setting that controls the live sticker feature, which uses an online service to provide stickers online. If that is not silly enough, there are now options to allow configuration updates for the Books Library, to allow extended telemetry for the Books tab and to allow a shared Books folder, which means absolutely nothing. Predictably, the book functionality appears to be more important than adding group policy settings for Microsoft Edge that could be really useful.