Quite a few of my blog posts start off with a customer engagement - this one is no different. This week I am implementing a LoginVSI Automation Machine powered RDS infrastructure at a large automotive company. This process involves packaging quite a few applications including Dell Active Roles 7.1 MMC Interface, a single, intuitive tool designed for comprehensive privileged account management in Active Directory and Azure Active Directory. Packaging Dell Active Roles console is *SUPER* easy with Login VSI Automation Machine because it comes in an MSI package, so all you need to do is simply importing the MSI file into the media repository, creating the corresponding package and adding Install MSI action item. However, when opening the Dell Active Roles 7.1 console, the following error reared its ugly head: "MMC could not create the snap-in. The snap-in might not have been installed correctly.", followed by "CLSID: {D50F5BB7-337F-4A59-8797-BDA0B7DC1DF0}".

Normally I would check vendor's documentation for installation prerequisites, but as I did not have access to any product documentation I had no choice but to investigate myself. My initial hunch was to check the Event Viewer's Application log for error messages, but I came up empty.

Next, I opened the ActiveRoles.msc file in Notepad++. It referenced two CLSID: {C96401CC-0E17-11D3-885B-00C04F72C717} and {D50F5BB7-337F-4A59-8797-BDA0B7DC1DF0} (the one shown in the error message). The first CLSID references mmcndmgr.dll and is used by default in all consoles. The only purpose of this snap-in is to create a sub-section in the console root. The second CLSID corresponds to the file C:\Program Files\Dell\Active Roles\7.1\Console\ActiveRoles.msc. So I still had nothing.

After some more digging around the customer's base Windows Server 2012 R2 image, I noticed that the installation did not include various Microsoft Visual C++ runtimes. As a rule of thumb, I always include following Visual C++ runtimes in the reference image because a lot of applications out there are dependant on one or multiple VC++ libraries: 2008, 2010, 2012, 2013 and 2017. 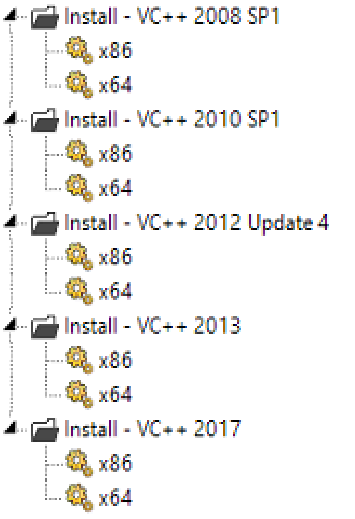 Once I built and deployed the Visual C++ bundle, I could start the Active Roles console and the issue was resolved.