The Case of Skipped Application Installation

As a reader of this blog I suspect that you, like me, are a frequent visitor to TechNet forums. And I bet many of you have already posted a question there or even spent a few hours helping other people out. A couple of days ago, a user posted a question on the MDT forum asking for guidance on how to upgrade Windows 10 VMs to the latest iteration of Windows 10 "Creator's update" using what I consider – not surprisingly given my history  - the best free deployment solution, Microsoft Deployment Toolkit (MDT), partially because a Microsoft Deployment Toolkit task sequence allows you to completely automate the feature update process.

I began by taking a look at the standard MDT In-Place upgrade task sequence. After opening the task sequence editor I selected the "Post-Processing" group and started poking around conditions that MDT must evaluate before running task sequence steps assigned to this group. I quickly came upon the registry condition, that ensures that MDT executes this task sequence group only if the value of the registry key Software\Microsoft\Windows NT\CurrentVersion\Windows\Win10UpgradeStatusCode equals SUCCESS. 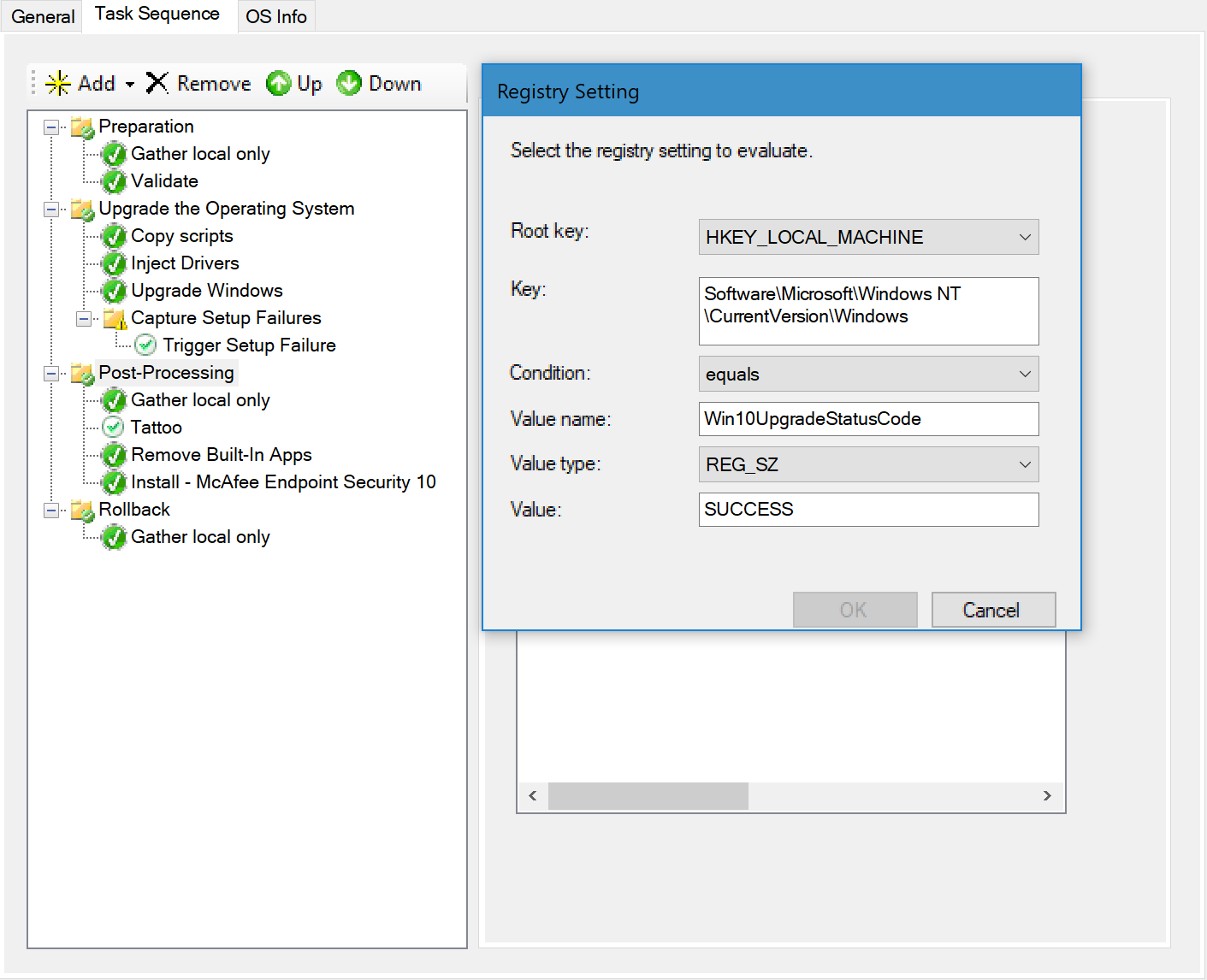 I suspected that the underlying issue was that the registry value was not being set which in turn meant that MDT would skip processing the task sequence group "Post-Processing". This obviously wasn't a good sign, but it wasn’t the worst of it: usually %DeployRoot%\Scripts\SetupComplete.cmd  script is supposed to set this value, however in this case the script was missing the relevant bit:

After some discussion with the user I had a pretty solid idea what happend: the user was still running Microsoft Deployment Toolkit 2013 Update 2. A quick internet research showed that UpgradeSummary.wsf script - which I believe previously set this value - was removed in MDT 2013 Update 2 and the value wasn't being set anymore.

I followed up with the user, he added the missing line to SetupComplete.cmd and - as expected - application installation worked on the next feature upgrade installation. Another case closed. I hope that your TechNet troubleshooting met with similar success.

More in this category: « The Case of 'Something Went Wrong' The Case of Existing Email Address »

What calls the setupcomplete.cmd after a successful upgrade? We are MDT 8456

Here is some background info on how SetupComplete.cmd works: https://docs.microsoft.com/en-us/windows-hardware/manufacture/desktop/add-a-custom-script-to-windows-setup#run-a-script-after-setup-is-complete-setupcompletecmd

Anton Romanyuk
There are no comments posted here yet